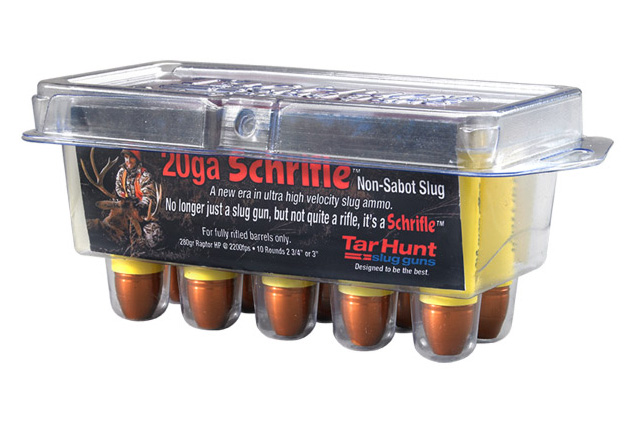 After hearing from a hundred or so hunters, in the last two years, that have tested the TarHunt 365gr Copper slug in their 20ga H&R 960 Single Shot have some good news. They report that the slightly over size bore of the H&R 960 is able to group the TarHunt bore size Copper slug inside 125yards.   It appears that the lighter slug, made of Copper material, is able to get enough grip on the rifling, when fired in a slower 1-35tr, to stabilize the solid/longer bore size projectile. (A 1-35tr is just a little over 1/2 the RPM’S of the normal 20ga 1-24tr.)              I am sure that results will vary from  barrel to barrel, so testing you gun is the only way to find out for sure.

Even though the 20gr Schrifle™ Raptor Alv 270gr and the NeoTec™ Copper 365gr slug will stabilize in the 1-35 twist rate of the H&R; the bore size is still well over the size required to shoot a SAAMI diameter slug with good accuracy.  Actually testing of your barrel is the only way to know for sure. After 50+ years, if I have learned one thing, when it comes to rifled barrels- “there are NO certainties”.

I have conformation, from the H&R gun designer, that H&R 960 20 gauge slug guns were indeed a (1-35tr) and were designed for the old Foster/rifled lead slugs. The barrel bore sizes are very large by today’s SAAMI standards established in 2000. The bore can be as much as a full .007ths bigger diameter (on top of the rifling) than it should be.         Accuracy Note: With that big a bore only the Lightfield Hybred Exp and Commander IDS sabot design can adjust itself to that big a bore diameter, thus maintaining the proper RPM’S for stabilization; because of its patented key-on sabot design.

The 20ga Schrifle™ round is the 3rd generation of a hunting slug design and is the ongoing result of over 5 years of research & development. The “out of the box thinking” that culminated into this unique design and was only made possible by the advancements in precision machining from the likes of an iso certified machine shop, plastic development, and new molding techniques. Most importantly, the quality control and consistency of the new gun powders over the last decade has vastly improved.

The 1st generation of sabot slug was developed in the early 1980’s for police use. In the late 1980’s that design was purchased & slightly redesigned by Bob Sowash (the BRI – Company). Then bought out by a shared venture of Winchester & Federal and re-introduced for big game hunting with rifled barrels for the 1991/1992 hunting season.

The 2nd Generation: The slug revolution took place over the next four years, (1993 thru 1996), by the industry in an effort to catch up with the accuracy of the TarHunt RSG-12 slug gun design introduced in 1992. The RSG-12ga would later on would be picked by Field & Stream Magazine (2009) as one of the 50 best guns ever designed, even when compared to the world’s best rifle designs. Even now, after 34 years THCR still remains the “World’s Leader in Slug Guns Accuracy”(1987-2021)”.

The 2nd generation (current production) sabot slug round is a placebo at best; it’s the industries way of giving you “the illusion that rifle like accuracy is available when sabot ammo is fired in rifled barreled slug guns.” Remington introduced the “Accelerator”; a 22cal bullet sabot in a 30-06 and a 30-30 Win case in the 1970’s. That design didn’t work then but the industry when ahead and tried to put ML & Pistol projectiles into the same design sabot for the country’s slug gun hunters anyway. 12% of sabot ammo are flyers using this design.

Ten years ago TH started thinking about all the issues with current sabot type slug ammo the conclusion was that the industry, had pretty much, already exhausted all concepts of using sabot technology developed from the early 1980’s thru 2015. The Lightfield Hybred EXP series using a sabot that is keyed fast to the projectile, still remains the best and most consistent of the current sabot designs.

The “Schrifle”™ design slug is the 3rd generation utilizing a bore size, NON-SABOT hunting slug. This new slug concept uses “out of the box thinking” to correct a number of problems that has plagued the first two generations of sabot slugs since the beginning.

It was decided that the 20 gauge would be best gauge to start with for this “out of the box thinking” attempt to correct the issues with sabot ammo. After 4 years of ongoing research the non-sabot generation, 20ga “Schrifle™” round was released, late in 2015, in an attempt to make an “accurate” short range rifle out of a shot gun. It will take a little time for the 20ga “Schrifle” round to be tried in the wide variety of 20ga rifled barrels configurations that were produced over the last 35+ years. Although, it will stabilize in any known 20ga twist rate. When fired in any of the pre-2000, 20ga RIFLED BARRELS; Accuracy may vary greatly depending on the actual bore size of the barrel.

Wind Drift Information for 98% of all sabot slugs and heavy projectiles under 2000 fps.

WIND DRIFT ISSUES*: Another way of saying slug movement away from your point of aim. It is caused by the wind putting pressure on the projectile while in flight. It pertains to all rifles, slug guns, muzzle loaders and anything that moves thru the air. The effect is more dramatic on slow moving projectiles under 2000fps! It amounts to the “TOTAL AMOUNT OF TIME and the DIRECTION”–the wind has to push on the projectile!”

A head, tail, or cross wind, will affect all posted wind drift and drop figures. Any combination thereof can even move a slug in a diagonal or vertical direction. Head wind or tail wind also has a dramatic effect on the amount of drop seen when firing on an open firing range verses that of actual hunting conditions. With all of these wind drift variables it is obvious that ANY built in flyers (up as high as 12%) cannot be tolerated!

As you can see it ONLY takes a 10MPH cross wind to pretty much double the amount of win drift for each additional 50yds down range with guns under 2000fps. That’s why slug guns and most muzzle loaders CANNOT truly be compared to a rifle. Just by adding 800fps to a rifle round (@2800fps) you will have Aproxamently 75% less drift than a slug gun. That means the rifle will have Aproxamently 4″ of drift, instead of 16″ of drift at 200yds, like the slug gun.

These wind drift figures are based on a steady (10 mph cross wind). Most people do not NOTICE wind Speed or Direction changes if the wind speed is 10 mph or less without some form of wind direction indicator present. NO wind indicators/flags where you hunt, you are telling me?

Any place I have ever been hunting there is ALWAYS at least one or two (foot high) weeds of some sort, being pushed in some direction by the wind! All you need to do is look for them. Watch them swinging (move one direction and hold it for a few seconds) around on the range while your practicing. You will soon learn what amount of movement gives how much wind drift. On a golf coarse where wind flags are the norm. If you removed the wind flags from a golf coarse there would be all out war back at the club house. Must be because the velocity of golf balls are also under 2000 fps.

The average wind speed during Nov-Jan (the normal deer hunting season) is 17 to 23 MPH. Guess what the wind drift is at that wind speed? Its “FEET” ! “Considering all of these wind issues; less built in flyers in the ammo is the key to achieving the best down range accuracy when shooting a slug gun around hunting season”. “First eliminate the cause of most of the flyers, (the sabot). Then use a slug that actually fits the bore diameter of a 20 gauge rifled barrel”. “Then and only then can you learn how to shoot a slug gun, at long ranges, in the wind”.