“The 20ga NeoTec™ FLC”  round is a hollow Copper Slug”.  The NeoTec FLC rounds uses the “Hollow Bullet with Truss” design. “The only new slug in 86+ years”

Advisory:  The 3″ NeoTec FLC Copper slug is the right choice for any 20ga rifled barrel with a  3” chamber.    The TarHunt 20ga 3″ NeoTec™ FLC – (Full Length Case) is loaded with a 355gr hollow Copper slug.  The ultimate fully expanding Copper slug!    Don’t be fooled by the look of a 3” NeoTec™  FLC round. The easiest way to recognize the TarHunt 3” NeoTec™ FLC round, at a glance, is because in has a 16MM (HIGHER) PLATINUN/SILVER color head.  The 2 ¾” NeoTec FLC round has a (SHORTER) 8MM BRASS head.

The “TECHNOLOGY”   Behind the “Hollow Bullet with Truss” slug design.

Both the 20ga 2 ¾” and 3” NeoTec™ FLC 355gr Copper design slugs are an example of “Out of the Box Thinking.”  They must be used in their designated chamber size for “top performance”. The 20ga NeoTec™ FLC rounds use the “Hollow Bullet with Truss” design with a pressurized elastomer/polymer truss-core. The elastomer core replaces the lead core normally used in most slugs, rifle & pistol bullets since the late 18oo’s. This new type of core is flexible enough to allow the side walls of the hollow copper slug to fully lock into the rifling, while upsetting to match the inside diameter of the barrel. The pressurized elastomer truss still remains strong enough to support the thin copper o-jive area (pointed section of the slug) from collapsing inward while the slug is moving thru the barrel. These two events are critical to insure Consistency; by eliminating the wild flyers caused by out of round slugs or under-rotated sabot flyers.

“Why the “Hollow Bullet with Truss” design”

By using this new “Hollow Bullet with Truss” design, a premier bore size 20ga slug can be manufactured, while greatly reducing its overall weight. The ideal flight profile of 20ga bore size slug, for use in a rifled barrel, is (1.125ths long x .619ths in diameter).  If that size slug were made of solid Copper, It would weigh over 1000gr. Now a slug can be made with the same “physical size and shape”, but weighting only 355 grains instead. The new “Hollow Bullet with Truss” patent design and the inovative elastimore/poylmar core (replacing the normal lead core) now makes it all possable.  That’s a 2/3 reduction in weight, and 26% increase in diameter over 45cal sabot rounds. Making it possible to achieve the same velocities as the much  smaller in diameter, 45cal sabot rounds, with a full bore 62 caliber size slug.   Upon impact, the pressurized elastomer truss aids in the rapidly outward expand of the o-jive area (pointed section of the slug).

For comparison purposes this photo shows a 1974 Kennedy .50 cent piece; next to an expanded “Hollow Bullet with Truss” design Copper  slug. It was expanded by firing into a ballistic gelatin block from between 45 and 50 yards away. That range duplicates about 70% of most deer taken with a slug gun. The expanded slug weights 302gr (an 83 weight retention) and it expanded to just over the size of a half a dollar!      Notice that the expanded nose secton only folds out at right angles to the body of the slug.  They did not fold back down along the sides of the slug; making it smaller as it moves forward, after inpact! An expanded slug like the one shown, @1800 fps, is spinning at 54,000 rpm’s (when fired thru a 1-24 twist rate barrel), and still weighting over 300 grains, after it expands. “It acts just like 1 1/8″ diameter hole saw”! 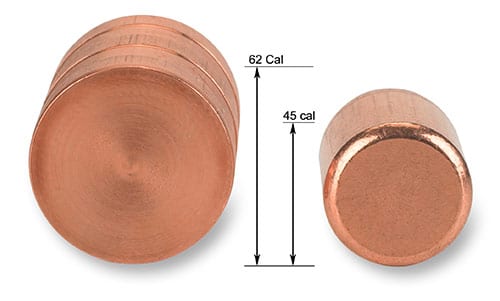 The size relationship remains the same ratio, at any magnification.

The 355gr Copper slug is a premium bore size slug, and is on track to be largest diameter, heaviest, fastest, full expanding of all the Copper slugs in the industry. While retaining as much as 83% of its original weight when used on thin skin big game. The bore size 3″ 20ga  NeoTec FLC 355gr Copper slug has a unique felt recoil. Because of the weight of a bore size Copper slug, locking directly into the rifling. A clock wise twisting effect is applied to the gun as the slug accelerates from ZERO up to 54,000 rpm’s, when it’s fired thru a rifled barrel. The effect may go unnoticed by most shooters but the high left flyer toward 10:30 is often present to some degree; up and left, aproxamently 2″ in both directions even at 50yds.  Think about what happens when your shooting between 100 and 200 yards! That 10:30 flyer was caused by you relaxing/changing the grip on your left hand!

“THIS IS A MUST”  A firm two hand (GRIP) style gun control is required while shooting a slug gun off of a rest. GRIP the slug gun the same way you would hold onto a 460 Wby Mag, firing a 600gr bullet!  “Not because the recoil is that Sevier”. Because of the amount of TIME the slug spends in the barrel. While constantly trying to twist the slug gun clockwise, all the time the slug is in the barrel.  If a high left shot consistently frustrates you; it is because to light a grip was used on the gun, particularly with your left hand!

Note: Without a consistence amount of grip with both hands the amount of muzzle lift will also change the trajectory (point of impact) down range each and every shot.  Every shooter will hold the gun slightly different but ONLY when you become consistence in your GRIP, you can truly zero your slug gun. That’s why another person CANNOT truly zero someone else’s slug gun. Deer Rifles do the same thing but the projectiles are around 1/3 the weight, or less, of a slug, and the projectile spends less than 1/2 the time in the barrel. So the amount of the high left issue is greatly diminished.  See the video elsewhere on the TarHunt web site home page; on Zeroing a Bolt Action slug from a bench for more information.

The loss of pressure is why a shorter case, when fired in a 3″ chamber, has less recoil when fired in a 3” chamber.: That same unsealed jump is why the 2 ¾” (20ga or 12ga) round has less felt recoil when fired in a 3” chamber. Everyone contends that the 2 ¾”   round are more accurate than a 3” round. When the 2 ¾” round and the 3” round, share the same weight slug; they are both loaded to the same pressure.  Then WHY doses a Full Length 3″ Case always seems to kick more. The 3” case sealed off a 3″ chamber right away, assuring Constance pressure and velocity, each and every round. The truth is, the less felt recoil is due to the loss of chamber pressure by firing a 2 3/4″ round in a longer 3″ chamber. That loss of pressure  just makes the 2 ¾” slug round MORE shooter friendly. The less the felt recoil the more consistent the shooter! When you buy the correct length plastic case, for your maximum chamber length, “full velocity, colder temperatures and slug alignment” issues are pretty much resolved.

“NEVER  fire a 3” rounds in a 2 ¾” length  chamber”   Always remember; it will fit into the chamber and the action will close, even extract an unfired round!   If a 3″ round is fired in a 2 ¾” chamber; pressures will GO VERY HIGH because the 3” case does not have enough room to fully open. So the slug must literally TEAR off the end of the case before it can move down the barrel. That could be a disaster waiting to happen!  SERIOUS INJURY MAY OCCUR TO THE SHOOTER, AND/OR BY STANDERS, and POSSIBLY DESTROY THE GUN! TarHunt assumes no responability for the misuse of the NeoTec FLC or Schrifle slug rounds.

Don’t be fooled by the TarHunt 3” NeoTec™ FLC round it, can be recognize at a glance, because it has a (higher) 16MM Platinum/Silver color head. The 2 ¾” NeoTec FLC round has a (shorter) 8MM BRASS colored head.

The NeoTec FLC line up:

ATTENTION:  Residents of CA, CT, DE, DC, IL, KS, MA, NY, OH and WA, check your local laws before ordering ammunition products.  By placing an order, you certify you are of legal age and satisfy all federal, state and local legal/regulatory requirements prior to purchase.

WARNING: FOR FULLY RIFLED BARRELS ONLY. Keep out of the reach of children!   By using this product the USER assumes all responsibility for firing this round through any type of a fixed choke or choke tube, or a rifled tube period! TarHunt is NOT responsible for any and all damages to the firearm(s), person(s) firing the firearm, and or person(s) as bystanders due to any misuse.