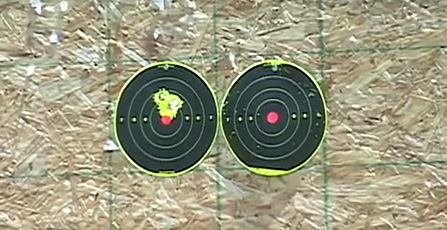 Between hunting seasons and shooting sessions seal your unused slugs in a zip lock bag and pack them in a sealed ammo box.  Store the cooler in an area of your home where the humidity is as low as possible and the temperature stays between 50 and 70 degrees Fahrenheit year-round.  The more stable you keep the temperature of your slugs, the better they will shoot. When stored properly, slugs will shoot reliably even after 15 years.

After the season any ammo that was exposed to above normal dampness— Remove the ammo from the boxes. Let the ammo and the box exposed to the warm dry air in your home during the months of Jan & Feb. The low humidity present in most homes over those two months will remove all the moisture that was absorbed, by the powder, while hunting. Remember slugs are open ended, they are not sealed like the rounds used to hunt waterfowl, turkeys, etc.

Place the ammo back into the box, place the box in a zip-lock bag (the smaller the bag the better). Now placed the sealed bags in a seal able type ammo storage box, Styrofoam cooler, and keep the box where it is cool and dry.

Unless you open the plastic bag, the ammo will last 10 to 15 years. Next year if you use them, do not open the bag unless you are going to fire them. The extra rounds you carry hunting can just as easy stay in the bag, in your pocket as not. This drying out procedure can be done more that once

There are a lot of similarities between shooting rifles off the bench and shooting slug guns, however knowing and practicing the differences can equate to putting more meat in your freezer.

When you first arrive at the range be sure to create your shooting setup on a sturdy, fixed base such as a heavy table or bench. Position a solid rest under both the forend and butt portions of your gun’s stock. It is not sufficient to rest only the forend of your gun’s stock or to rest on a non-solid item such as a folded coat. Do not attempt to zero your gun from a non-fixed base like the hood of a truck.

Adjust the position of your gun as it sits in the forend and butt rests so that without having to touch the firearm the sight picture is dead on your target. Slide your body into shooting position without disturbing this sight picture. Begin applying shoulder pressure to the butt of the gun and offset any forward gun movement by pulling straight back with your right hand in trigger squeezing position. With your left hand on the forend of the gun’s stock, pull firmly straight back and down at a 45-degree angle. Hold this pressure on the gun as you concentrate on keeping the cross hairs fixed dead on your target. Squeeze the trigger gently straight back until the gun fires. It is common for a shooter to anticipate the gun blast as well as the recoil, but both should come as a complete surprise when a perfect shot is made.

Consistently integrating the above procedure into your shooting sessions will eventually produce shot groupings you will be proud of. Keep in mind that 60% of your overall group size can be directly attributed to inconsistent left hand pressure. Wind is also a significant negative factor when attempting to shoot small groups. Learn to read the wind!

Over the years, there have been hundreds of questions asking about the use of mechanical recoil limiting rests to zero slug guns such as:

“Would it be a wise move to build or use a locking type/heavy rest that would take all human error out of the process of sighting in a slug gun, except knowing when to pull the trigger because of the wind?”

The problem is when you use this type of rest, you artificially make the gun much heavier, more solid, than it is when used in the field.. You will end up sighting the gun in at a heavier artificial weight with a certain amount of muzzle jump. Then when you shoot the gun at game in the field at its normal weight, it WILL SHOOT to a different point of aim because you can no longer limit the muzzle jump to the same position, at the moment the slug leaves the barrel, while hunting, as it did at the range when you were sighting in using a locking/heavy type rest.

This is the same issue with any gun that has significant recoil and muzzle velocities under a 1900-2000fps range. Muzzle loaders/Slug Guns are all in the same boat. The time the bullet spends moving through the barrel (dwell time) during the recoil cycle is the same amount of time that the gun is being pulled off of the target, by recoil, until the bullet exits the barrel.

There is a huge difference in barrel dwell time between 1650-1900fps slug guns and rifles with muzzle velocities above 3000fps, such as varmint/magnum rifles. At above 3000fps guns move about .030ths of an inch and the bullet has already exited the muzzle and the dwell time has